The Quiksilver In Memory of Eddie Aikau is a one-day big wave invitational that takes place at Waimea Bay. The Eddie contest is held only when waves are consistently 25 feet or higher.  The Eddie Aikau Surf Invitational was last held in December 2009. 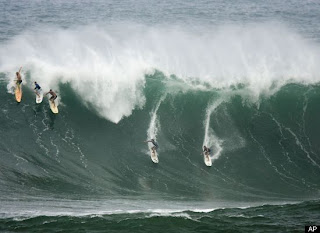 The National Weather Service says a north-northwest swell will begin building Wednesday and will likely peak Thursday morning at about 30 feet. Thursday’s waves will likely peak between 3 am and 9 am. The conditions look ideal for elite surfers and it has Eddie Aikau Surf Invitational potential.

Eddie Aikau Surf Invitational organizers told surfers there is a good chance the contest will run Thursday, January 20, 2011 at Waimea Bay. George Downing, the contest director, said “We will do exactly what Eddie and big wave riders have always done through the years – watch the swell developments, be ready, and wake up to see what the day delivers. We might go, we might not, but we will always be ready for when the bay calls the day.” Spectators from all over the world are expected at Oahu’s North Shore to witness the Quiksilver In Memory of Eddie Aikau event, one of surfing’s great shows. The event has only been held a total of eight times in its 26 year history. 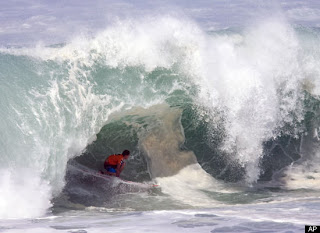 The Quiksilver In Memory of Eddie Aikau is the most prestigious big-wave invitational.  It is the only one sanctioned by the Association of Surfing Professionals (ASP). The event is held in memory of Eddie Aikau, one of the greatest Hawaiian watermen of all time.  Eddie Aikau was an early big wave rider and a respected lifeguard at Waimea Bay. He was the first water safety official to be stationed at Waimea.  He was lost at sea while paddling for help when the Hawaiian voyaging canoe, Hokulea, capsized off of Oahu. Eddie Aikau was 31 years old at the time.
The Eddie was last held on December 8, 2009, in 20 to 25 foot surf and was won by Greg Long of California.  “It really is about the wave and celebrating the ocean,” Long said after winning The Eddie. “The respect and camaraderie in the lineup you don’t find in too many places in the world, and this event really encapsulates everything that’s great about surfing: the friendships you make in the water and looking out for one another.”
A few weeks ago we took Hawaii Surfing Lessons from Goofy Foot surfing in Maui.  We were in a group of 6 beginners and everyone in our group learned to surf and caught several waves.  We may not have a future in professional surfing but we had a great time.  We will leave the Eddie to the best of the best and hope that we will be able to watch them on Thursday. 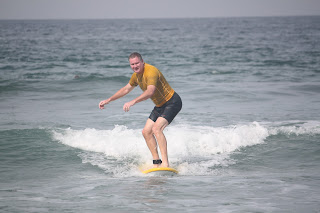 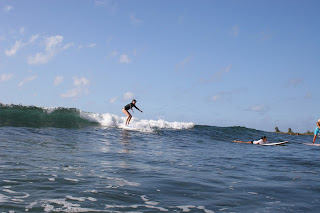 Check out www.Quiksilver.com/Eddie for updates from the Quiksilver in Memory of Eddie Aikau Waimea Bay event.

Elizabeth has been blogging about the best Hawaii Activities for over 7 years. She loves sharing the Aloha Spirit.
View all posts by Elizabeth →
This entry was posted in Oahu Tours and tagged Eddie Aikau Surf Invitational, Goofy Foot Surfing, Hawaii Surfing Lessons, Surfing in Maui, Waimea Bay. Bookmark the permalink.